Sometimes life is stranger than fiction.  I’m realizing this more and more in New York.  As the weeks begin to pile up and I’m becoming more familiar with my new surroundings, I have realized that Manhattan sometimes does exist as an island.  Think about it, It’s not really attached to any other land masses…except by a few bridges…and because of that I believe certain events occur here that may be exclusive to this little piece of real estate.

It was the day our furniture was being delivered that we “met” our first neighbor.  Crate & Barrel was the first to arrive on our doorstep.  That was fortuitous because they had our couch…and our bed.  Now, we could at least sit and sleep.  So, there we sat on our new indigo couch watching paint dry.  No kidding, we had the slowest painter in the world and nothing else to do but watch him. Then, Keith peered out our 9th floor window and casually observed the scene in the building across the street.   “Hey, there’s a fat naked guy sitting in the window and smoking a cigarette”.  My mind immediately leapt to the classic Friends episodes, where they too, were grossly transfixed by their own naked, fat guy.  I assumed he was kidding, but, nope there he was in all his naked big belly glory just puffing away and enjoying the fresh morning air. 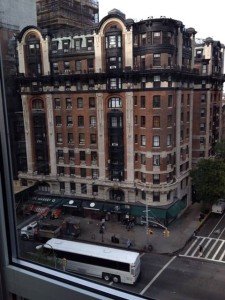 Above: The scene of the fat, naked guy sighting. You can’t see him, but, he’s there. A little like a perverted Where’s Waldo?

But wait, there’s more.  Fat, naked guy is just the first in the cast of characters that make up our neighborhood.
-   There’s the transvestite that works at Sephora.
-   There’s the crazy woman who sits and sings on the bench of Broadway’s landscaped median.
-   There’s the guy who walks around in lime green pants, a fur coat and either cowboy boots or pink shoes.  (One day I saw him puffing away on a cigarette.  His rotund belly forcing the sides of his fur coat open.  Hmmm, it looked oddly familiar.) 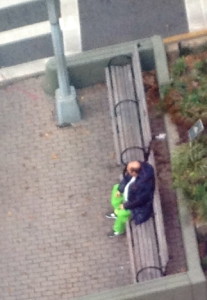 The green panted dude enjoying Saturday afternoon on the median strip of Broadway.

But it’s not all looney tunes here.  And that’s what makes New York so very special.  They might look crazy, eccentric or both, and then, bam, you find out they’re a brilliant artist.

One mild, fall Sunday morning Keith and I were walking to Starbuck’s.  We saw an older slender man with his long gray hair combed back.  His fitted sports jacket and bright green shoes was a look that he comfortably and completely owned.  He reminded me of Leopold from the Bugs Bunny cartoons.  And I thought, who knows, maybe he’s a conductor.  It’s New York, it’s very possible. 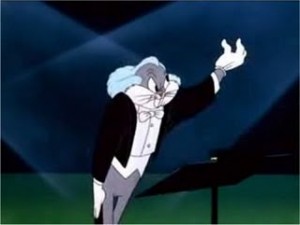 Keith ducked into Starbuck’s while I waited outside with Chelsea.  I chatted with a few other neighbors and their dogs and waited.  Keith came back with two steaming hot ventis and one very juicy story.  He had eavesdropped on a spontaneous conversation between two strangers behind him.

Guy 2 was Clive Arrowsmith a famous rock photographer.  And, he was just waiting in line for coffee and some shameless self-promotion.

Later that afternoon, we took Chelsea for a walk in Central Park.  It was a beautiful October day.  The sun was shining and the air was crisp.  We stopped for a hot dog.  As we sat on the park bench there was a father and his son sitting on the grass.  The dad was beautifully playing Twinkle, Twinkle Little Star on the flute.  I looked at Keith and said “This guy plays in the New York Philharmonic”.

And the truly crazy thing is that he probably does.

3 thoughts on “Won’t You Be My Neighbor?”