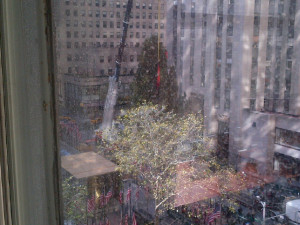 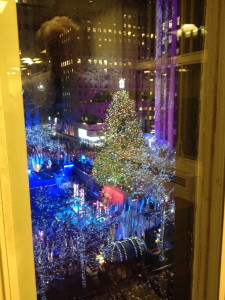 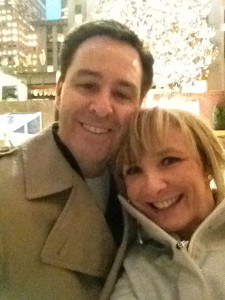 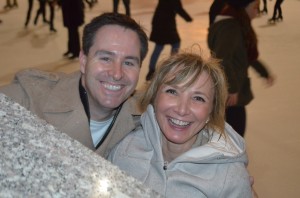 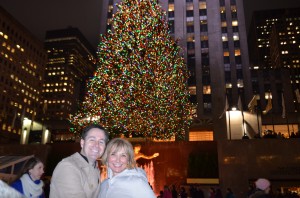 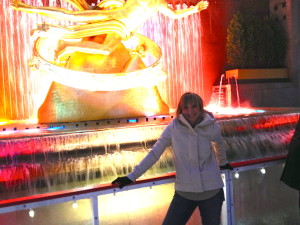 The great thing about being a child is that everything in the world is a new experience.  Unfortunately, as adults we seem to take a laissez faire attitude of “been there, done that”. But last week, Keith and I got to experience a small sliver of childhood wonderment right in our own Manhattan neighborhood.

Last week was our first Thanksgiving in New York. It was all so brand new to me and I attacked it with the vigor of a 5 year old gobbling down an ice cream cone.  Our Thanksgiving Eve started with the New York tradition of watching the balloons be blown up for the Thanksgiving Day parade.

For weeks I had been begging Keith to take me to see the balloons being blown up.  As the date approached closer, I pretty much just told him that this was what we were going to do.  Luckily he was game, because by Wednesday afternoon, he really had no say in the matter.

So, it was the night before Thanksgiving, and with a misty rain over our heads, we walked 2 blocks east of our apartment to watch the Macy’s parade balloons be inflated. We left our little C-dog at home for the event.  We really didn’t know what kind of mayhem we might be bringing her into and we couldn’t risk the Snoopy balloon trying to take liberties with her.  Chelsea’s a little lady after all!

The mayhem was actually a highly organized sea of humanity.  The queues were so efficient it would have brought a tear to any Brit’s eye. They had little metal fences that created a zigzag maze that people weaved through until they reached the front of the museum. It was truly a very British and very easy experience.

So, I hate to admit it because I’m going to sound like a total dork. But, as we got closer to the American Museum of Natural History I could start to see some very large shapes swaying in the wind. I was as excited as a 13 year old at a Justin Beiber concert.

So what behind the scenes magic does Macy’s and NYC conjure up to get ready for the big day?  Well, all the balloons are laid out in the middle of closed streets (can’t risk a cab side swiping Spiderman) that surround the perimeter of the American Museum of Natural History on the Upper West Side.  There are stereo speakers set up along the way.  I expected Christmas tunes but instead it was a variety of pop music from Coldplay to Katy Perry.  I thought it a little odd that they weren’t playing Christmas music. Maybe, they didn’t want to turn Thanksgiving into Christmas?  I can respect that.  Now, as a spectator, you just shuffle around the entire perimeter of the museum looking for great photo ops with your favorite characters.

The first balloon I saw was SpongeBob SquarePants. There he was in all his goofiness just dancing in the breeze.  Okay, it was bigger than a breeze it was a gusty wind. And it became a city-wide worry that the high winds would ground the big balloons on Thursday.  Seriously, it was the lead story on the news that night.

Next, I saw Ronald McDonald being inflated. Well, I kind of saw him.  He looked like he’d face planted right in the middle of 77th Street. Maybe he had a little too much holiday cheer in his eggnog shake.  I make no judgments. 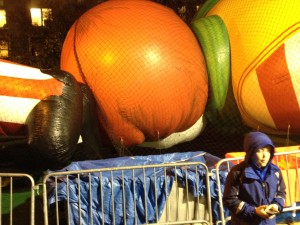 “Oh Yeah”, next it was the Kool-Aid man. After that, was this unknown giant purple hippo. I have no idea who this hippo is but she was just so adorable.  I immediately chose as my favorite balloon to cheer for in the parade. 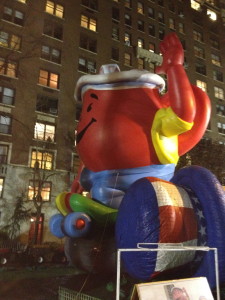 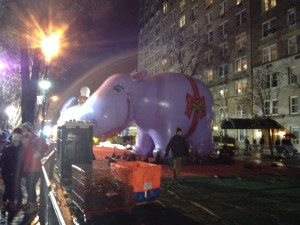 Snoopy with Woodstock riding on his back was one of the new balloons for 2013.  Both looking as cute as ever!  I didn’t take a picture of the balloon after Snoopy.  It was the Macy’s star.  If I had a Red Rider BB gun I would have turned it into a “shooting” star.  After all, Macy’s did kill Marshall Field’s.  But, I don’t want to taint my holiday capitalist cheer with bad thoughts.  Santa just might read this post.

After completing the hour long shuffle, we had seen every balloon that would float down the parade route the next morning. Oh, and one last note, however big you think these balloons are, well trust me, they’re bigger.

The next day we were lucky enough to be invited to a Thanksgiving breakfast in an apartment on Central Park West.  As I watched the parade go by from the 4th floor window with a mimosa in hand, I found it all so lovely and warm and sophisticated.  But, the true magic of the holiday was what I had seen just 10 blocks north the night before.