I hardly think it’s been a well kept secret that recently the weather has been arctic with polar vortexes, manitoba maulers and all those closely packed isobars.  Since I have a low tolerance for temperatures below 20 degrees, I haven’t been getting out as much as I would like.

So, with the snow and wind whipping up outside my window, it has become a great time to watch movies.  One Saturday afternoon, while snuggled under our faux grey chinchilla throw, Keith and I stumbled across the movie You’ve Got Mail with Tom Hanks and Meg Ryan.  We watched the first few minutes and quickly realized it was filmed on the Upper West Side.  Our new little neighborhood was in a 15 year old cinematic time capsule.  I knew we had to watch the entire movie.  It became a treasure hunt to see how many places we could identify in each scene.  Yes, it’s totally a dorky thing to do, and I completely love it and own it.

The plot of You’ve Got Mail involves an adorable, spunky Meg Ryan who is the owner a small children’s bookstore and Tom Hanks who is building a big box book store nearby.  Tom’s big box spells out certain doom for Meg’s tiny establishment.  The romantic plot revolves around an anonymous, flirtatious  friendship that the two strike up via email.  The time period is during the infancy of email when aol ruled the dial-up world and we all longed for the infamous voice to announce “you’ve got mail”.  Anyhow, the entire movie was filmed in the UWS and watching it made me realized why I love my new little neighborhood.

So, without further ado, here’s a virtual tour of some of my favorite spots on the Upper West Side courtesy of You’ve Got Mail…

Verdi Square
It’s called Verdi Square, but, I call it Paris.  It’s a small triangular patch of cobblestone with trees, benches, street vendors and the 72nd & Broadway subway stop.  It reminds me of a Parisian street corner.  Before moving to NYC, Chelsea and I sat here for about an hour while waiting for our next apartment appointment.  We perched on a bench and whiled away our time people watching.  I bought a bottle of water from the street vendor.  I struck up a conversation with an eccentric woman.  Chelsea shared her water with an elderly man’s dog.  A hipster crushed on Chelsea.  Everyone we encountered that hour was local and friendly.  And, I remember feeling comfortable and at home in that little triangle of a square.

PS – Verdi Square can also be seen in the opening of the Michael J. Fox Show.  Now we see groups of families and tourists recreating the opening shot. 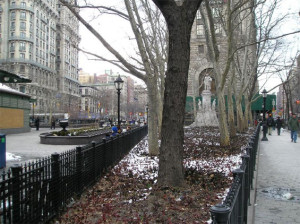 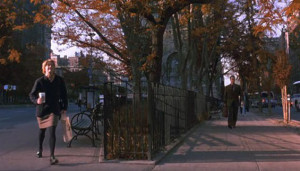 Gray’s Papaya
This little hot dog stand is just a few blocks from our apartment.  It looks like the type of dive that results in post-meal alternating swigs of pepto bismol and alka seltzer.  But, New Yorkers have stomachs of steel.  After all, a lot of New York cuisine originates from street carts.  So, I’m thinking a permanent structure is always a safer bet.  Sadly, I still need to try a Papaya dog to properly compare it to a Chicago dog. 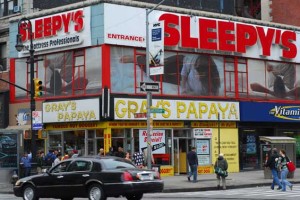 West End Avenue
West End Avenue is one block west of our apartment on Broadway.   It’s a beautiful tree lined residential street.  The wide sidewalks are prime real estate for walking Chelsea through the neighborhood. 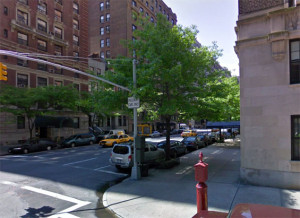 Starbuck’s Coffee at 81st & Broadway
Yes, this is a Starbuck’s like any other Starbuck’s in the world.  I prefer it because it’s not as crowded as the one on 75th and Broadway where all the tourists from the Beacon Hotel seem to head. 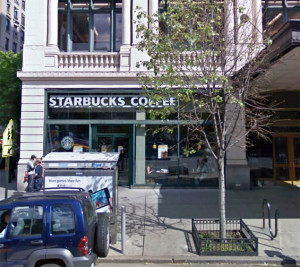 Zabar’s
I’m still trying to figure out Zabar’s as a grocery destination.  I’ve pretty much mastered Fairway Market.  I have Westside Market down cold.  And Whole Foods is my go-to spot for anything organic.  But, Zabar’s still eludes me.  I think it’s more of a specialty shoppe than grocery store. But, their second floor house ware department rocks and gives Williams Sonoma a run for their money.

Ocean Grill
Purely by coincidence, Keith and I made dinner reservations for Ocean Grill the day we watched You’ve Got Mail.  They have a beautiful interior and wonderful food.  Now I just have to wait for Spring to try their outdoor dining.

Riverside Park
This little gem of a park is just two blocks from our apartment.  We alternate weekend walks with Chelsea between here and Central Park.  Riverside Park runs just along the Hudson River.  It’s narrow and long and according to Chelsea it has better squirrel chasing than Central Park. 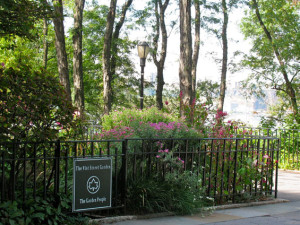 So, there it is.  My little neighborhood all wrapped up in a happily ever after, rom-com bow.

One thought on “You’ve Got Mail”